On the northern shoreline of the spellbinding Lake of the Woods district, Kenora, Ontario is a coveted tourist destination. The small city of 15,096 (2016 census) is located 50 km east of Manitoba, nearly 200 km east of Winnipeg. The area was traditionally named Rat Portage or “Waszush Onigum” in Ojibwe, in reference to the traditional “portage of the muskrat.”

Lake of the Woods includes parts of Ontario, Manitoba, and the midwestern U.S. state of Minnesota. The lake is more than 110 km long and wide with 105,000 km of shoreline and 14,522 islands.

Around 1836, the Hudson’s Bay Company capitalized on the rich resources and established a trading post next to Kenora. Fish processing, boat building, pulp and paper milling and flour milling continue to be the economic foundation here.

With an airport just 13 km to the northeast, and a seaplane base downtown, the small community swells in the summer with both Canadian and American cottagers taking the trip to enjoy the jack pines and trophy walleye.

The Kenora Rowing Club hosted the rowing events at the 2017 Canada Summer Games. The spring-fed Rabbit Lake is 2200 metres long and can accommodate seven racing lanes. It’s known as one of Canada’s best venues.

There are 21 wall murals depicting heritage townscapes in Kenora. Before spray paint and brick walls were an option, local Indigenous peoples captured their surroundings in pictographs using berry juice and saps on rock faces. The ‘Native Pictographs’ of Spirit Rocks in the Lake of the Woods area are only accessible by boat.
“Husky the Muskie” is the unofficial town mascot. The 40-foot tall statue in McLeod Park is a 2.5 tonne tribute to the lake’s prized muskellunge, the largest member of the pike family. Kenora is part of “Sunset Country”, known best for its 70,000 fishable lakes.

Kenora is a part of the Thunder Bay Real Estate Board, which also includes Marathon, Terrace Bay, Manitouwadge, Geraldton, Sioux Lookout, Dryden, Sioux Narrows, Fort Frances and Atikokan. According to the Canadian Real Estate Association (CREA), single detached homes came in above-average in September 2020. Sales were reported to be down 5.2% since the same time period a year ago but the median number of the days on the market was 18, one of the shortest times ever recorded. The median sale price for a single detached home in September 2020 was a record $265,500, reflecting an 8.4% increase from September 2019.

A one-bed, one-bath starter home can be found for as low as $209,900 and options climb steadily from there to a $1.3M executive lakefront home with four-passenger rail system to get down to the dock.

Kenora’s diverse amenities will satisfy every member of the family. The Aquatic Centre at the Kenora Recreation Centre has a 25 metre lane pool, toddler pool, waterslide and Tarzan rope! The Thistles Rink (also located within the recreation centre) was home to the Kenora Thistles who won multiple Stanley Cups in the early 1900s.

Keewatin Memorial Rink has summer ice programs and hockey camps. There are two lakeside golf courses, a well-established network of biking routes, and five beaches for picnicking or pickleball!

Kenora is also proud to be an “age-friendly” community offering accessible and affordable transportation, health services and housing alternatives. Confederation College is known for its Police Foundations course and Mature Student Education curriculum.

[The label off of Lakewood Lager Beer] 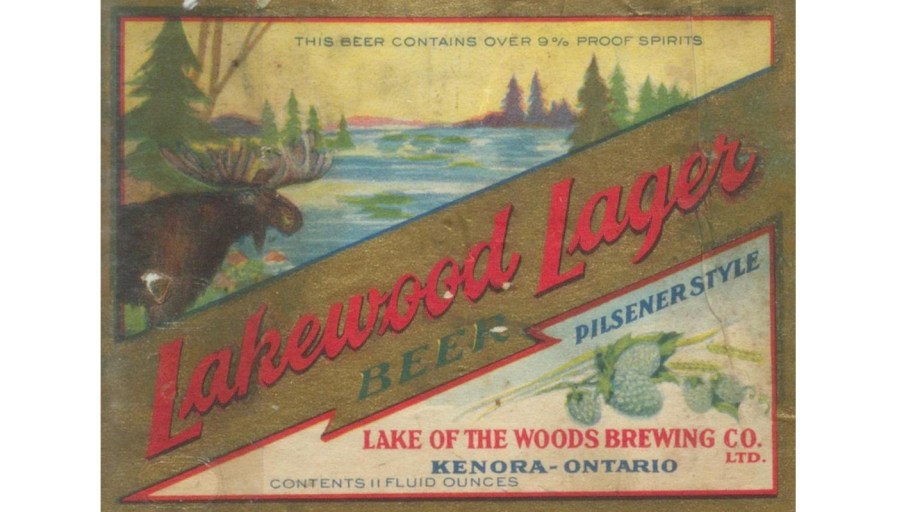 The original Lake of the Woods Brewing Company opened in 1898 and was shuttered during the prohibition era. It reopened in 1927 and closed again in 1954, unable to survive against increased competition. It re-launched in 2013 and the Ontario-based company has since partnered with U.S.-based Lake of the Woods Brewing Company to bring the beer to Minnesota, and a more recent expansion into Winnipeg, Manitoba. Tour the 105-year-old firehall (the flagship location) that houses the brewery and taproom for a long gulp of history.
Rushing River Provincial Park offers 16 km of groomed cross-country ski trails and is the gateway to Eagle-Dogtooth Provincial Park’s five canoe routes which run from 32 to 103 km in length—for those in no rush.
The Redditt Glass Bottle House is the only known bottle house in Northwestern Ontario. Myrtle Deverell asked her husband to build her a dollhouse for her growing collection. Completed in 1973 with 25,000 bottles, 1,000 pounds of mortar, and 1,756 hours of labour, the Redditt Bottle House grounds have grown to include a wishing well, working windmill, elves castle, and the House of the Three Bears.

If you’re looking for a backyard that resembles a Group of Seven painting, Sault Ste. Marie offers a similar landscape and vibe. Residents in both Kenora and Sault Ste. Marie refuse to hibernate in the winter—in fact, they think it’s the best time and place to go out and play! Contact a local REALTOR® to explore these alluring northern cities today!