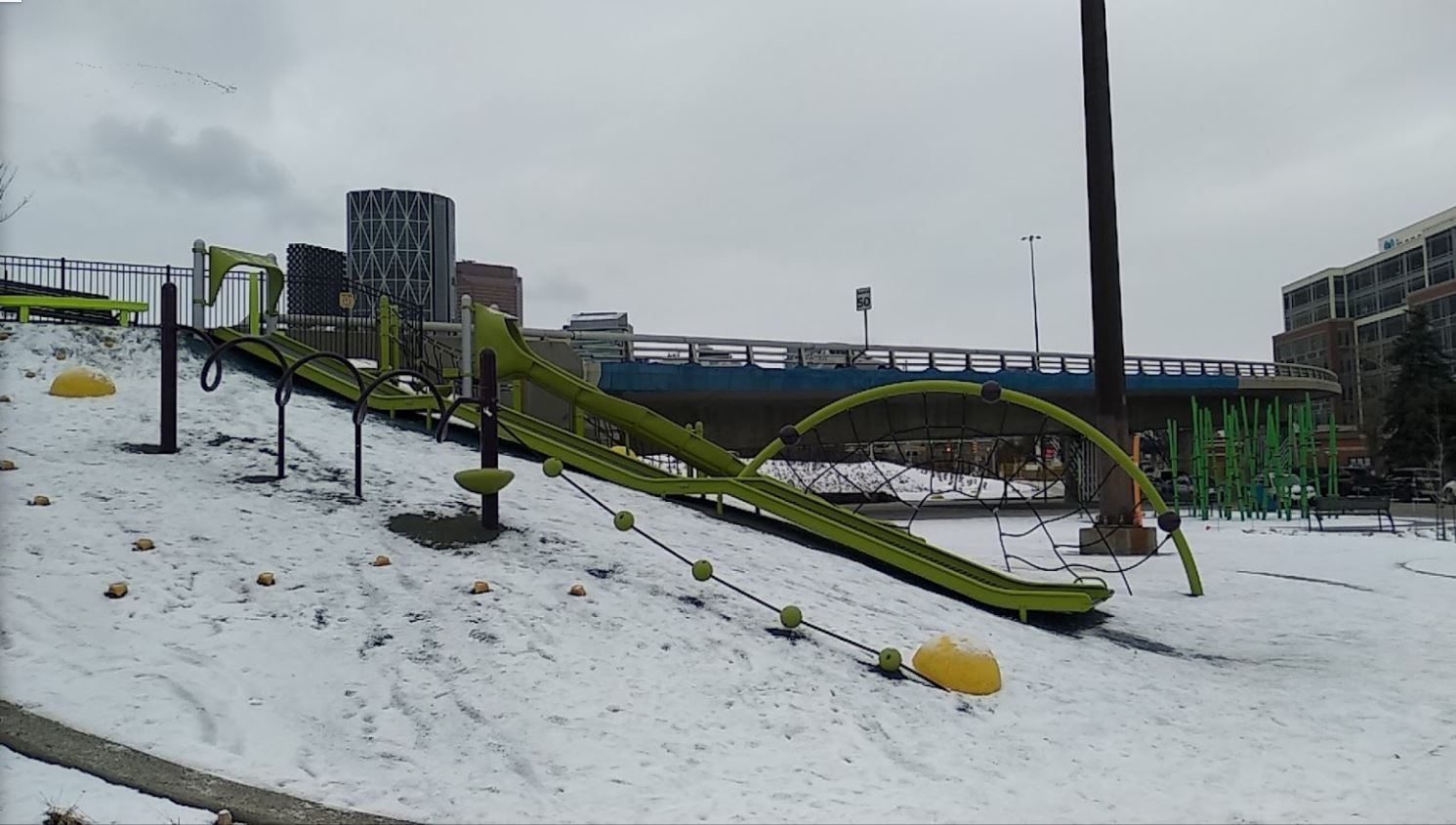 It’s not a spot where you would normally expect to find a recreational space. Yet, Flyover Park, located under the overpass that links westbound Memorial Drive to 4th Ave S.E. and the East Village, is the newest addition to Calgary’s parks system.

The park, which opened in December, is the result of a partnership between local Grade 6 and University of Calgary Landscape Architecture students, who teamed up on the design to create a distinctive hub for the community.

“The park’s setting next to a flyover is very unique, as are the play features you will find there: hill slides, bamboo jungle, family-style games and more,” said Parks Foundation Calgary CEO Sheila Taylor. “I’m so excited to see children and families already enjoying this park. I hope this innovative park will inspire communities to think of how they can reimagine public space.”

Referencing New York City’s High Line, which transformed a long-abandoned section of elevated railway into one of the city’s most popular outdoor spaces, Taylor says the novel location of Flyover Park – which had previously been little more than a cement pad – is part of the attraction.

“There is a trend around the world towards reclaiming unused urban spaces and turning them into valued parks and pathways,” she said. “It is one of the most innovative spaces in Calgary and we are excited to see how much Calgarians will enjoy the park.”

This trend has started to play out across Calgary, which has seen a handful of unlikely spaces turned into parks in the past several months.

“WHAT WE’RE REALLY DISCOVERING THROUGH THE PANDEMIC IS THE REAL VALUE OF PUBLIC SPACE IN THE CITY, ESPECIALLY IN DENSE AREAS LIKE THE BELTLINE WHERE MOST PEOPLE DON’T HAVE A PRIVATE BACKYARD SPACE.” – PETER OLIVER, BELTLINE NEIGHBOURHOODS ASSOCIATION PRESIDENT

“High Park really came from the shortage of parks in Beltline,” said Peter Oliver, president of the Beltline Neighbourhoods Association.

In the inner-city Beltline – comprised of the historic West Connaught, Connaught Centre, Victoria Centre and East Victoria neighbourhoods – a lack of available space has made it difficult to create new parks.

“One of the challenges here is there’s only 30 per cent of the target amount of park space that the City targets per capita,” said Oliver. “And on top of that, it is costly to acquire new land in the Beltline – it’s mostly developed and owned, so we’re always looking for creative ways to increase the amount of public space available.”

The result was a 90,000-square-foot rooftop park in the heart of Calgary’s urban core that allows visitors to take an elevated stroll in the fresh air along a 200-metre boardwalk.

The novel approach embodied by spaces like Flyover Park and High Park – to essentially create something from nothing – is one Oliver thinks will become more prevalent, as cities look for ways to create new outdoor spaces for the public, especially in the wake of the COVID-19 pandemic.

“What we’re really discovering through the pandemic is the real value of public space in the city, especially in dense areas like the Beltline where most people don’t have a private backyard space,” he said.

“We need to look at not just grassy parks, but also other kinds of public spaces that, in some cases, are multi-use or piggyback on existing infrastructure land.”