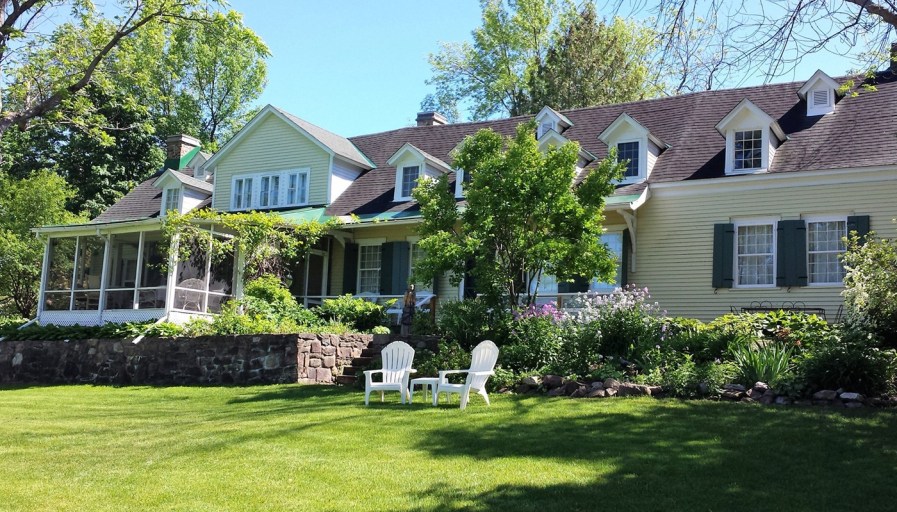 About 30 kilometres from Ontario’s eastern border and 60 kilometres west of Montreal sits the rural town of Hudson, Quebec. The Town of Hudson, a municipality of Greater Montreal, was officially established when the villages of Hudson, Hudson Heights, and Como amalgamated in 1967. While the town designation has only been official for a little over a half-century, Hudson has been populated since the 1700s when the region was still considered New France.

Both former NHL hockey player Matthew Lombardi, and the late Jack Layton (who was leader of the New Democractic Party from 2003 to 2011, and also has a park named after him there) grew up in Hudson.
Families from Fort Oka were the first to settle in the Hudson area as early as 1742.
The earliest English-speaking settlers from Scotland arrived in 1811 via the Hudson’s Bay territory—a particularly dangerous journey in part due to the ongoing trade war between the Hudson’s Bay Company and the Northwest Company.
Hudson was the first municipality in North America to ban the use of cosmetic pesticides. The bylaw was challenged by two pesticide companies in 1999, but was upheld by a 2001 ruling by the Supreme Court.

The rural beauty of this quaint town is undeniable, from the walkable proximity of the village proper, to the sprawling, wooded outskirts along the Ottawa River and further inland along its low rolling hills and ridges.

Speed limits are set to 40 km/hr or less throughout the town, making it a leisurely, scenic drive wherever you go. Winter brings with it the comforting smell of woodsmoke from chimneys, while summer promises a blaze of colour and beauty from gardens and the ample wooded areas throughout the town.

Residents in Hudson tend to lean towards the affluent, with an annual average household income of $121,058. It’s proximity to Montreal via Highway 40 makes it a prime location for upper middle and upper class professionals to escape the city’s bustle and higher living costs.

Hudson is part of the Vaudreuil-Soulanges region for QPAREB’s (Quebec Professional Association of Real Estate Brokers) reporting. According to the January, 2021 report, while new listings have declined by 19% over the previous year, total sales in the region have jumped by 33% over last year.

There are currently about 60 listings within the town boundary, ranging from for one-bedroom singles and condos starting under $300K to a massive four-bedroom mansion listed at $4.4M. If you’re hunting for the ideal dream home plot, a number of lots are also listed, just waiting for a match.

Some pretty stunning mansions to be found in Hudson, and one in particular that you can’t miss when heading west on Main St. is this gargantuan home that was listed some years ago for $9.5M. Check out the photos of this place on Homes of the Rich.

Hudson is a magnet for the arts in western Quebec and home to Artistes Hudson Artists which is Quebec’s oldest continually-operating English language arts club. Theatre and film also take centre stage in the community with the Hudson Film Society which hosts an annual film festival, the Hudson Players Club, and Village Theatre which is located in the historical train station.

Nature lovers are only a few minutes from the scenic Jack Layton Park for a stroll along its network of nature trails. Benches and tables have been set up along the river for leisurely enjoyment, plus the historical Sandy Beach is the perfect place to cool off on a hot day.

Nature conservancy is also important in Hudson, and Le Nichoir Wild Bird Rehabilitation Centre, one of the largest songbird rehabilitation centres in Canada, helps more than 2000 wild birds each year.

History buffs can step into the past with a visit to the Greenwood Centre for Living History, which was originally a home built in 1732 by Jean-Baptiste Sabourin when the area was still called New France. The original homestead remains intact as part of the museum, and is used to preserve and teach the rich history of the Hudson region. Hudson Historical Society is also an amazing resource to learn more about the region.

And, of course nothing follows a nature walk or trip through history better than a taste-bud tantalizing bite at one of the many fine establishments in Hudson. Be sure to check out Le Café Cozy’s edgy classics, Le Wendigo Hudson’s fine dining, Main Kitchen with their fine family takeout, catering or intimate BYOW (bring your own wine) dining room. Mikko Espresso & Boutique is the place for in-house roasted coffee and locally-made goods—grab a hot cuppa on a cold wintry day and enjoy it outside in their rustic courtyard beside their welcoming fire pit.

A range of shops await to serve residents and visitors, including Stirling Arts Boutique for designer clothing, Priscilla’s Beautiful Finds for décor and gifts, or La Boutique Nova where nearly new clothing and treasures can be purchased to support Nova Hudson health services.